It’s been a year and half since my husband’s boss popped the relocation question.  We were living in Austin, Texas; where we had lived for the past twenty-four years in various homes, neighborhoods, and areas of town.  Arriving in Austin one year after our wedding it became home; the place we began our life together, and had our son.  Time moves on, and people and places change. Nearly three years, Mr. GDC had been commuting; spending a few days a week in Houston, and few days at home. Hotel bills, dinners and fuel receipts lined his expense reports.  Eventually, Mr. GDC’s Boss Man asked us to consider a move to Houston, and with that our adventure began.

Looking about Houston several weekends in a row for a home, we found ourselves frustrated. Our home in Austin under contract, we were under pressure. Tired and stressed we needed a break. We drove south to Galveston in search of dinner.  It was a detour, an hour and half out of our way. And yet there we were sitting at Fisherman’s Wharf, a popular seafood restaurant, on the bay side of Galveston Island.  Over our fabulously fried shrimp, we watched a cruise ship back up. We couldn't help laughing. Have you ever seen a cruise ship back up? I had never considered they had a reverse?  I had never been this close to a cruise ship! We watched the ship portals slowly pass our window, one by one. Our stress level fell; great food, an interesting place, we were lost in conversation. We wandered; why not here? With that simple revelation the search for our next home turned from Houston to Galveston, and the brightly colored Victorian Cottages lining the street sides – 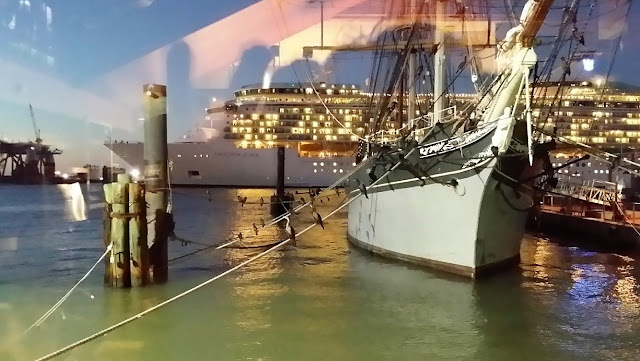