Our cottage was built in 1894, she's survived the 1900 storm, along with many others.  Standing the test of time, and nature, yet, she hasn't gone unchanged.  Homes that live for years, tend to change hands a bit, and curators often leave their mark.   The story is certainly the same for our sweet lady.  At some point, most likely around WWII,  changes were made to her façade. The clues that date her changes; the L shaped porch was taken in, and large French widows were used to enclose the porch, creating the foyer; sea foam green tile in Jr.'s bathroom, and brick newel posts. We best guess the owner at that time, wanted to modernize our Victorian Lady. 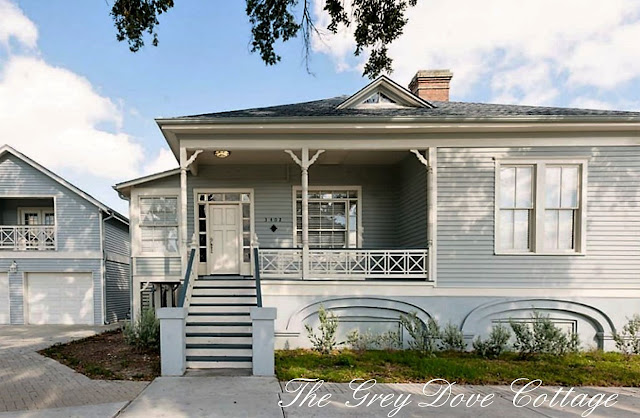 Our lady looks a little as though she is suffering from a personality disorder!  Victorian windows are tall and thin, usually double hung, each window is divided in half vertically. We have several of the typical Victorian windows.  We also have a pair of huge French paned windows, surrounded by side lites, in our dining and keeping rooms.  A little Victorian, a little 1940's. 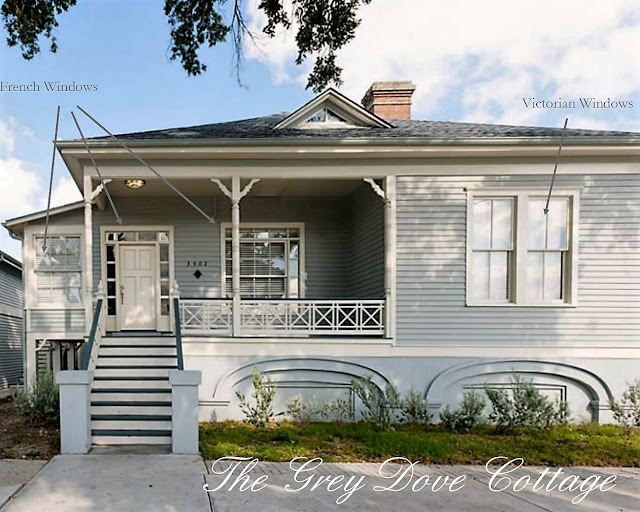 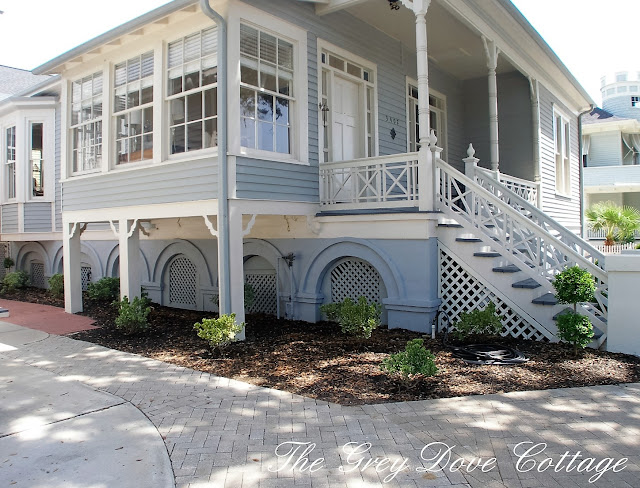 The first day we visited the cottage, I felt the newel post were, well, a bit out of sorts.  The scale was not in keeping with the cottage,  and they appeared to be brick, slathered with concrete. Perched at the bottom of the stair run, the "period" to a wooden balustrade dressed with an "X" motif, and intricately carved porch posts - they were a perplexity.  One I couldn't wait to lose! 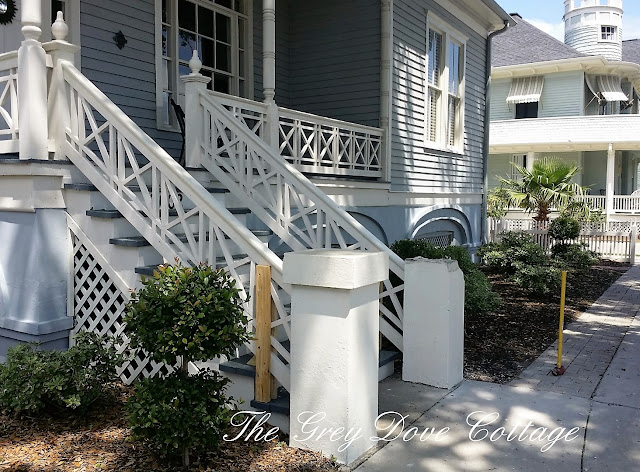 Fast forward a few months, and give a guy a sledge hammer, and Walla!    I have a huge fault, I tend to use words that do not properly describe the situation where renovation is concerned.  For example; "just", "easy", "simplistic" - anyone who has ever renovated knows that nothing is just easy or simplistic.  I envisioned the post might harbor the original wooden newel post, mates to the newel posts at the top of the stairs.  Wrong.  I envisioned that with a few hits of the sledge these "periods" would topple. 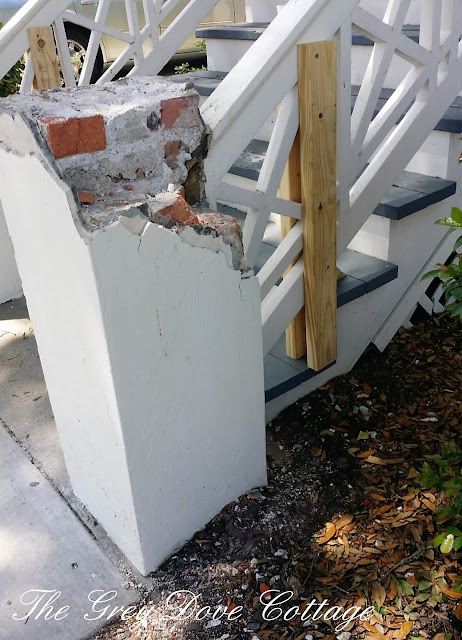 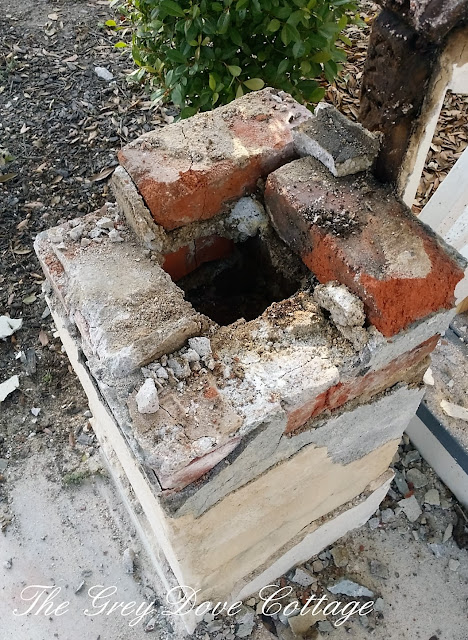 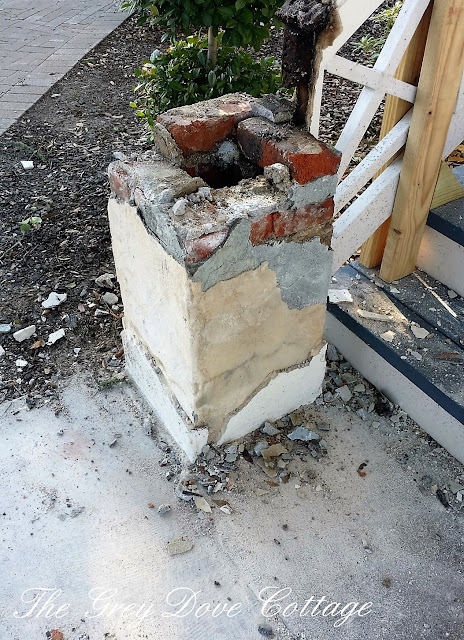 Pardon me, please, I requested a topple.  You know to tip over, fall, disburse, leave!  It took the better portion of the day with our young, energetic, Jr. at the helm of a 10 lb. sledge hammer.  Finally, the post were down. 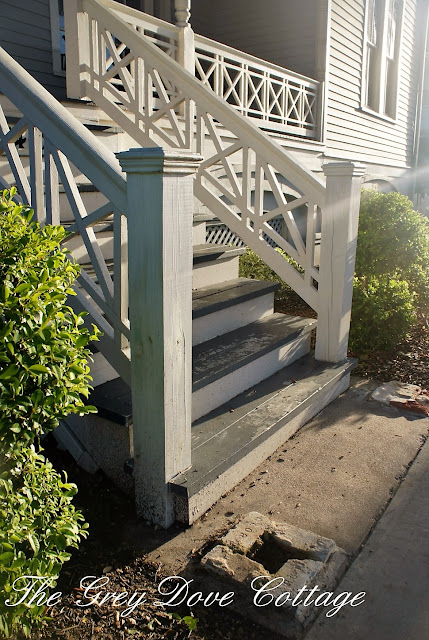 However, they left a footprint. I don't remember asking for a footprint. I thought I simply, wanted the post to just topple.  Who ordered a footprint? Not it! Wasn't moi.  Apparently, when the concrete stoop was poured, it was poured around the post, one brick depth sits below the concrete.  Someday, we need to lease a pneumatic jackhammer to level off the stoop.  I think I'll lay some pavers or bricks inside the remaining hole in the stoop; or maybe an herb. Brushing past an herb to start up the stairs, the aroma of rosemary or lavender filling the air, romantic. Definitely an herb. Rosemary at the entry to your home, supposedly turns away evil spirits, clearly I need rosemary, no doubt an evil spirit ordered that footprint. 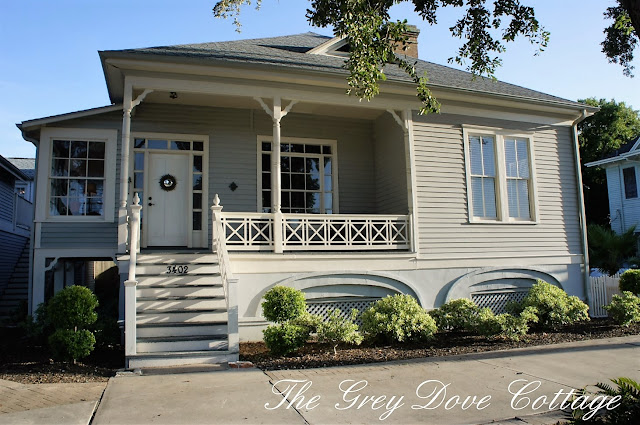 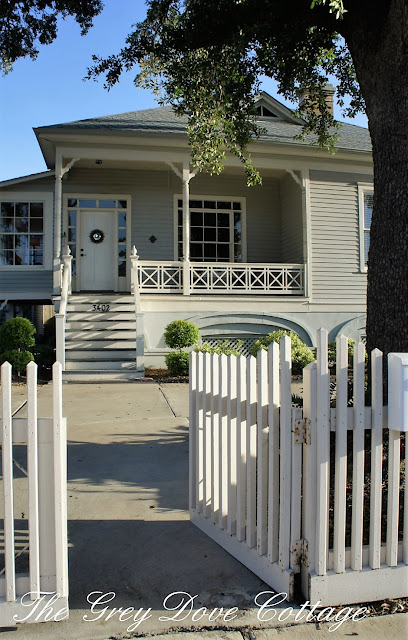 The newel post replaced with similar post to those at the top of the stairs, our lady looks a bit more in scale, happier. The wood works much better with the picket fence then did the bulky brick "periods". Someday as the temperatures begin to cool, and the island endures our five days of winter, I'll begin the daunting task of painting her.   For now, it's off to shop for a foyer rug -