I Love A Mardi Gras Parade!

The Knights of Momus, KOM is the oldest Galveston Krewe,  origins date back to 1867.   The torch lit parade of decorated horse drawn carriages, carrying Ladies and Gentlemen in their festive finery, wandering Sealy Street to Turner Hall, was truly an elaborate spectacle.  The masquerade ball, attended by the socialites of Galveston, featured a full orchestra, fine cuisine, and wine. The image of women in embroidered silk gowns adorned with flowing trains, feather head dress, and sequined masks, being escorted by men in stunning suits of equal ornamentation, stepping from carriages to make there way inside Turner Hall, these are images of distant dreams, memories.

Today the KOM parade is still one of the most exciting, and anticipated parades of the season.   Each year the theme of the parade is different, floats and costumes are amended to reflect the chosen theme. Thousands of beads are loaded upon elaborate floats to be tossed to excited crowds lining the parade route.  The king of the parade, sits high atop the first float leading the procession down the Seawall, across Rosenberg, and in to downtown Galveston upon Mechanics Row, then around to The Strand.

The magic of parade night, with sparkling lights the floats pass beneath the Mitchell arch on Mechanics Row - 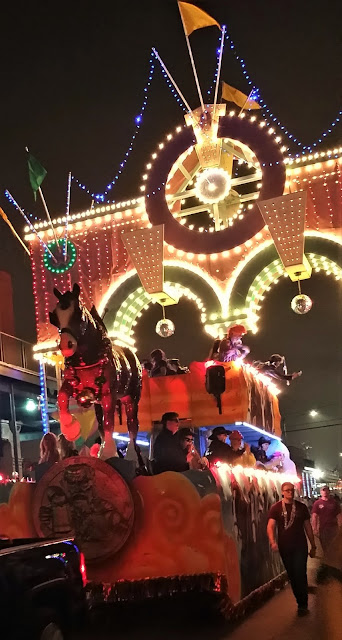 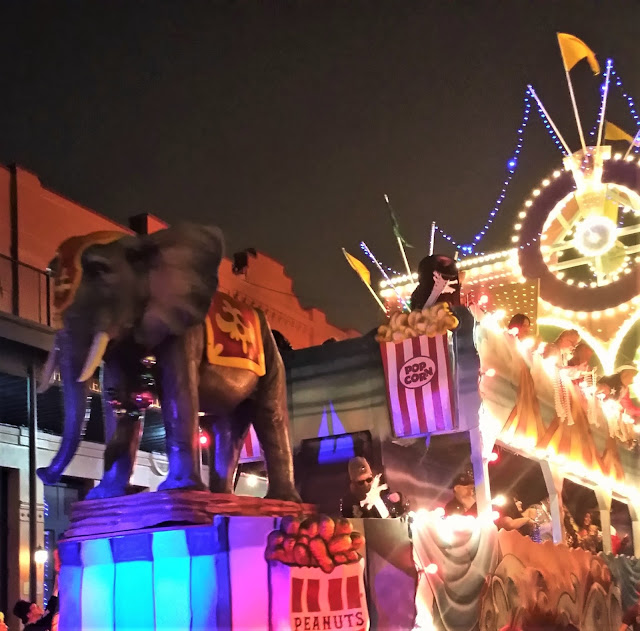 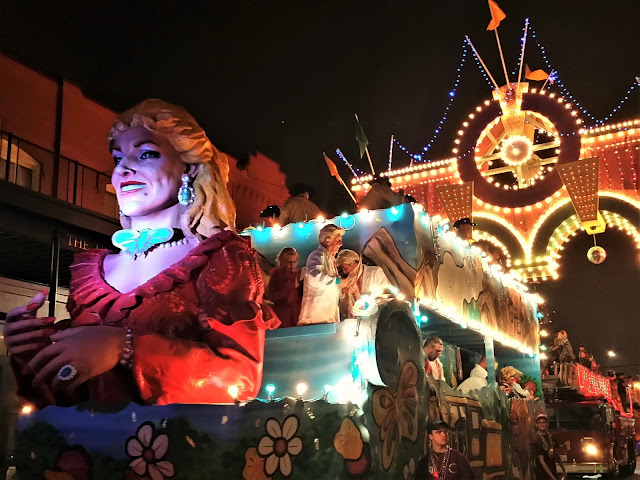 While formal masquerade balls have given way to a more relaxed atmosphere, and the horse drawn, torch lit carriages of yester year, evolved into elaborate hand crafted floats,  the spirit of Mardi Gras is well, in Galveston. It's pure magic standing along the parade route as these unique works of art slowly wander past.  The excitement of the parade, anticipation of catching a strand of beads, the surround of lively music, and a festive spirit, all combine to create an extraordinary experience.

Want to spend Mardi Gras on the island with us next year?  Go here  to plan your trip, and learn more about upcoming events.