As we distance ourselves from one another, this Mother's Day is very different.  I'd like to offer you a little story about an inspirational Mom - 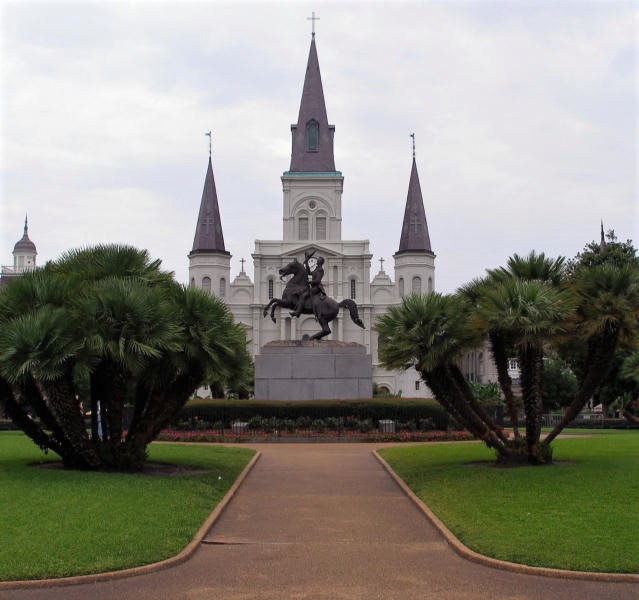 For the Love of Charlie

This spring morning had brought a chill to New Orleans, the skies gray, the breezes were crisp as they wandered down the narrow streets, cutting their way between the houses and buildings.  She was nervous, her stomach in a bit of a knot, her palms sweaty and her heart raced as she moved forward toward Jackson Square.  She feared he wouldn’t remember. She hurried past the French Market, briskly stepping down Decatur, as she emerged from the buildings, she gasped.  She dreamed of this day for so long.  There it was Washington Artillery, she stopped and stared, looking for him along the railing, he wasn’t there.
It had been a year since they placed their small brass lock upon the bottom of the railing, at the top of the stairs just across from Jackson Square. It was a token of her promise to return. She’d hoped during her absence it would serve as a reminder of her love for him. Clasped around a spindle near the center of the rail where they had stood so many times.  Washington Artillery was one of his favorite places. They often sat upon the benches and watched the ships wandering in or out of port, while they fed the pigeons.  He loved feeding the pigeons. As they sat she often told him stories  of Jean Laffite, Andrew Jackson and of the Louisiana Militia.  It was important to her that he understand the history of the city intertwined with her very soul.
Her departure was for good reason. They had a dream to own a small two bedroom “Shotgun” house, maybe something in Treme.  She worked at University Medical Center, Treme would be close. He could meet her for dinner sometimes when she had a double shift.  Money had been difficult for them, her student loans loomed over them like a dark cloud.  She excepted the opportunity to travel to Kwa-Zulu-Natal and assist with the fight against HIV and tuberculosis.  She would give a year to the cause, in exchange for forgiveness of the balance of her student loans.  The year would be an investment. Without those loans they could fulfill their dream of the small little house in Treme.  That dream was her inspiration while they were apart. When her body was riddled in pain from the long hours standing upon her feet, trying to help the masses of people she remembered how lucky she was. She remembered a house in Treme, she could see it in her mind the stairs leading up to the front door to the right, the small porch just large enough for two chairs, the porch edge lined with cast iron plants, a small grass covered courtyard. They’d paint the little house themselves, maybe a crisp white like a beacon of light to her as she would make her way home from work.
She made her way up the stairs to the main railing, where they had placed the lock.  She squatted near the center, the small lock still hugging the spindle, though   tarnished in the moist air, her promise lingered there within the little lock.  She stood up looked around Jackson Square, her eyes searched the sidewalks of Decatur, then she turned exploring Washington Artillery she longed for a glimpse of him. Suddenly he appeared across the park near the water. Her eyes filled with tears, they begin falling down her cheeks, she wanted to call to him, her voice cracked. He turned and saw her – the five-year-old bolted across the park, running to her, then jumping into her arms “Mom!” he screamed. She hugged him tightly, “I missed you so much Charlie” she whispered. He leaned back and squealed with excitement “So much better than Skype Mom!”, he hugged her again as he asked, “Are you home Mom?”, “yes” she said. Charlie called across the park “Pop! Come see! Mom is home!”.  Her Dad made his way across the park joining them in a group hug, “Hey, Sha, good to have you home Darlin.” Beignets! Charlie screamed, he jumped from her arms, grabbed her hand and began to pull her toward Café Du Mond.  “Come on Y’all”, they laughed and followed where Charlie led.  Her Dad smiled at her sweetly “You did it, Sha. You made it through.”. She reminded him that they had only made it because of his support. Her Dad lovingly took care of Charlie for a year. Without him their dream wouldn’t be attainable. The experience, the people she met, the children she helped and who had unknowingly helped her, would live in her memory forever. She was home, her precious Charlie holding her hand again.
There favorite table was available at Café Du Mond, she sat and enjoyed her coffee, along with the view of her two favorite fellas.  Her Dad and Charlie joked, his laughter blew powder sugar across the table, her hands flew up, as she screamed “Charlie!”. Their giggles, screams and laughter filled the air -
Happy Mother's Day!
ishing you all the Best -