When we moved in two years ago there was much to do.  Mr. GDC's home office has been neglected.  He has worked from home over 12 years.  But with COVID entered a new phenomenon, the video call. Where previously he was often on the road visiting clients, he is now quarantined at home in what is likely the dining area. The back wall behind his desk featured a built-in of narrow, short shelves that made dressing them challenging. Most books were too wide for the shelves, his certificates were too tall, the shelves set empty, with the red grass paper that covered the back the only decorative feature. Those awkward built-in shelves became the backdrop for all of his video conference calls.  Mr. GDC's sales partner texted me  "Andi, do something with those shelves!" We needed a design plan quick - 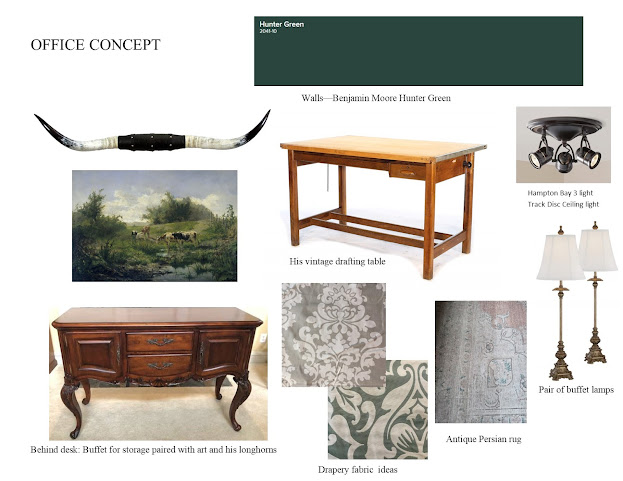 The room is clad in painted knotty pine. I thought at first to paint the walls a deep dark green to create a warm masculine atmosphere.  I chose Benjamin Moore Hunter green, a rich gorgeous green. We would use his drafting table, add an antique buffet for storage beneath the built-in shelves, then I am required to include his longhorns.  Yes, he has a set of longhorns they are just over 5' wide.  For lighting tall buffet lamps to compliment the height of the drafting table.  A ceiling disc track light  would work well for desk task lighting, while also washing the back wall.  Drapes in a cotton damask to provide pattern, yet keeping the feel casual.  Our antique Persian rug would be a nice base with its tan background and hint of green to ground the room in traditional style. I thought of hanging art over the shelves. For the art a landscape or river view featuring shades of blues and greens. I want something soothing in muted colors so during video chats the focus would remain on Mr. GDC, rather than the art becoming the focal point.    My concept; a traditional masculine space with a calm, quiet atmosphere to work in. 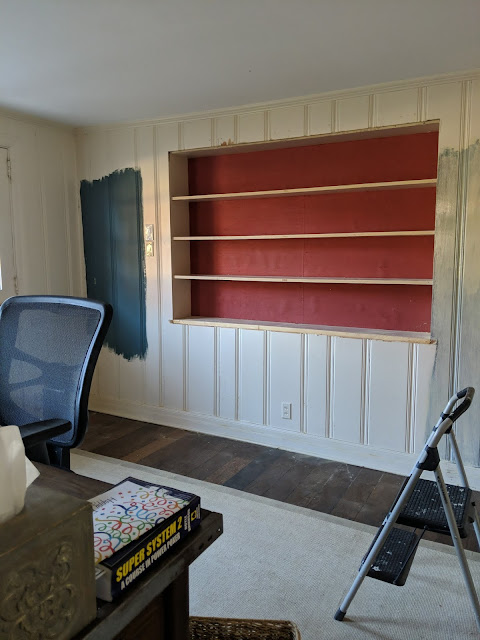 After playing with the built-in, we ultimately decided the best choice was to cover the shelves. Which created a huge patch. Since the Knotty pine walls are from 1950, trying to find pieces to patch the wall was impossible.  How would we deal with the patch? We considered a "feature" wall, maybe wallpaper, even a large decorative screen - maybe something Chinoiseries. 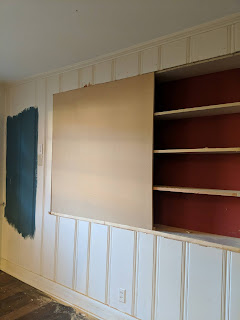 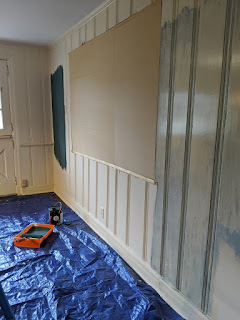 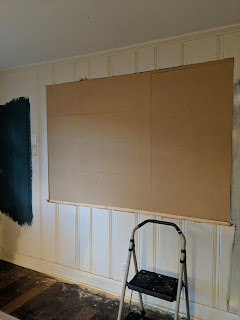 Apparently this room originally had wallpaper on the top section with a chair rail and wainscoting beneath on three walls.  We decided to remove the chair rail, which left even more damage that needed to be covered or repaired.  To make matters worse the top section of wall isn't as thick as the bottom, the walls are an uneven thickness. How to hide that? 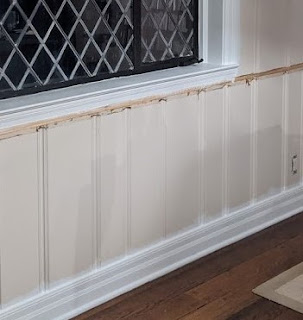 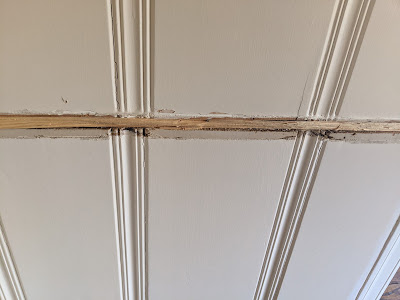 We considered removing all of the knotty pine and working with the ship lap beneath, which would be easier to patch.  I didn't feel ship lap would make sense with the English style of the cottage. I considered a heavy wallpaper on all four walls. The uneven thickness between the top and bottom of the walls would likely be seen with wallpaper.  We discussed drywall, there are no rooms in the house with drywall, every interior wall is finished with some sort of wood.  The solution - 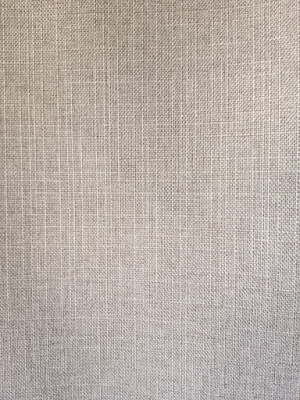 Fabric!   I chose a neutral shade of heavy weight linen.  The thickness of the fabric would solve the uneven thickness of the walls. No pattern would make installation easier and I thought the texture would add interest to the room.  After we decided on fabric, I had a gallon of gorgeous green paint sitting about, so I painted the ceiling dark green.  I love the drama a dark ceiling introduces. Green is likely our joint favorite color. 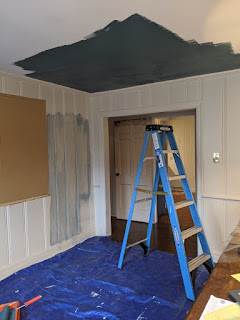 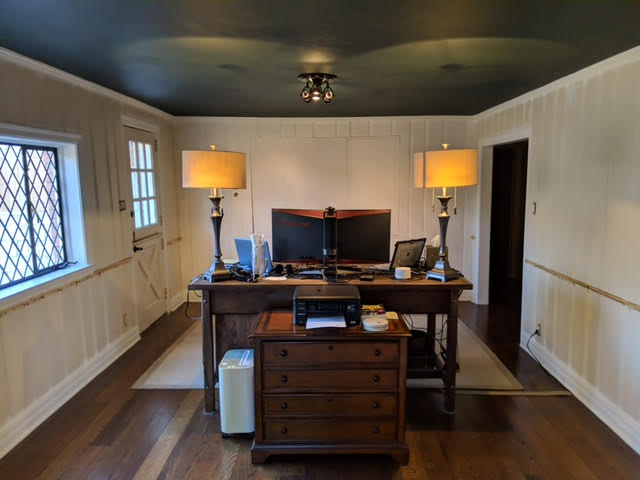 With the ceiling painted I began measuring the strips of linen and sewing them together to create  wide sections to cover each wall. We upholstered the walls by stapling the fabric at the top just under the crown molding, stretching it down and stapling along the bottom and finally the sides pulling it tight.  I realized early on how brilliant I was to choose a solid fabric, nothing is square in our 1930's cottage, a pattern would have drawn attention to that, trying to keep the pattern straight - I never would have managed.  The process of measuring the linen, sewing it together, ironing the seams, hanging in on the walls turned from days into weeks. 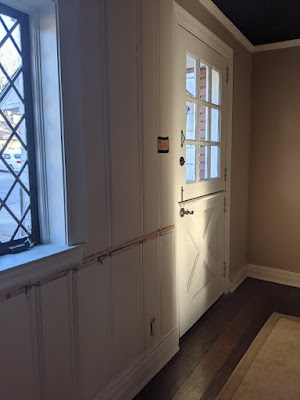 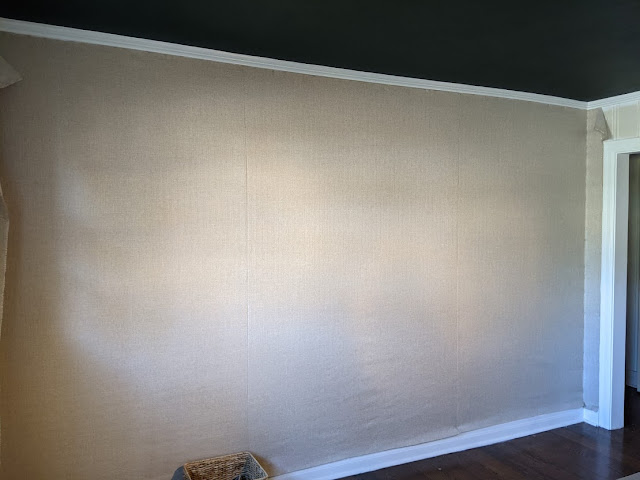 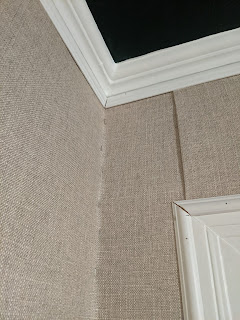 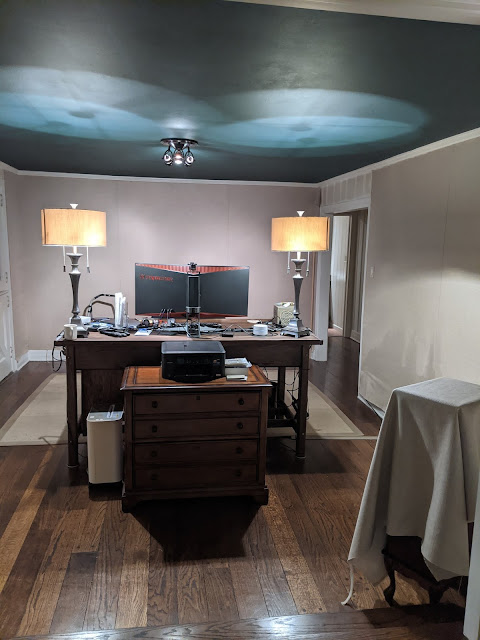 Whomever added the knotty pine to the walls, didn't replace the trim around the doorways and windows, which left the walls flat with the trim.  It looked odd.  We chose to add wood trim around each doorway, also the below the crown and above the baseboard to hide the staples from hanging the fabric. I thought this small bit of additional trim would add a much needed finish.  It worked great. As previously noted, nothing is square... each piece of trim had to be caulked, sanded and touched up. The fabric was on the walls, we had to cover each wall with plastic in an effort to protect the linen. We used painter's tape to hang the plastic, then carefully caulked, sanded and touched up the trim paint.  It seemed every task accomplished created another tasks. 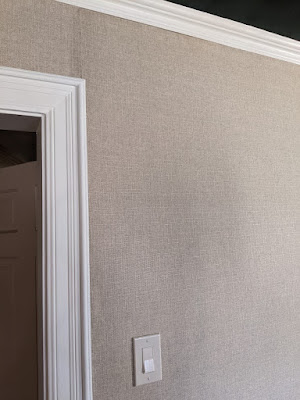 In each corner we took a piece of quarter round, cut it to fit the height of the wall and applied linen by using hot glue to secure the linen to the trim. We fastened the upholstered quarter round to finish the corners and hide the rough cut edges of the linen.  It gives a subtle definition, hides the staples and finished out the corners. 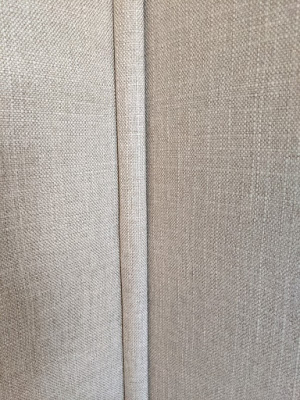 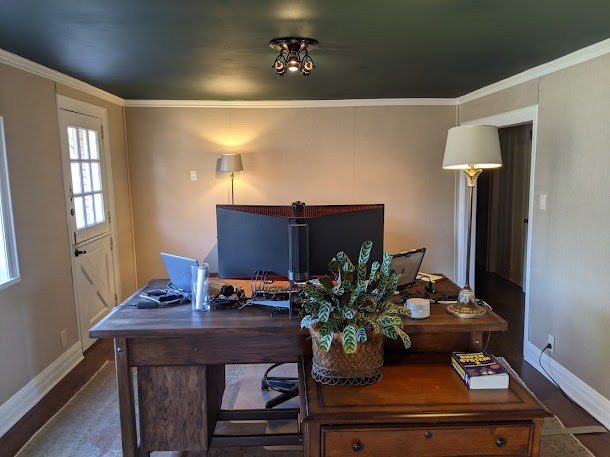 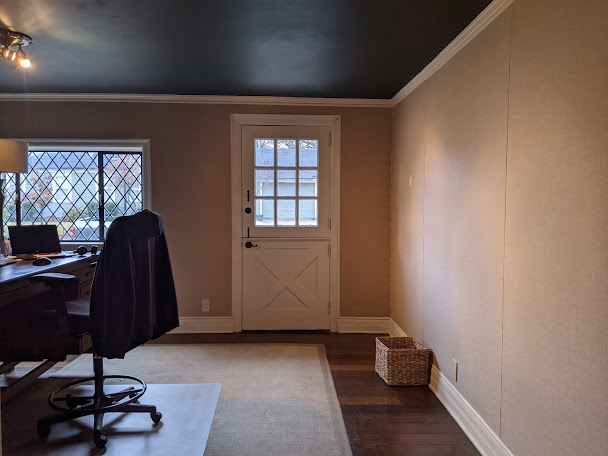 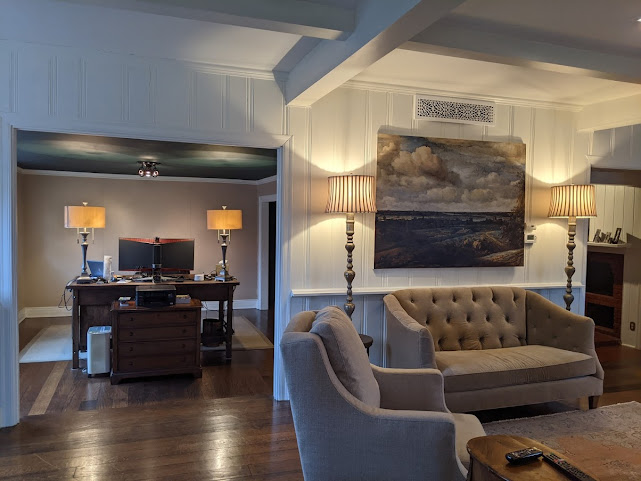 I love the walls. The linen provides texture while hiding a miss match mess beneath. The look is elegant. The trim adds a layer of finish the room needed.  The track disc works well for providing desk task lighting and will eventually illuminate art on the back wall. Though I love the deep rich ceiling color, the ceiling was a mistake. The living room is a foot higher than the home office. It didn't occur to me when we painted the ceiling dark that the office  ceiling would appear shorter when viewed from the living room due to the step down.  The best laid plans...

I am scheming to change the ceiling color.  I know! The walls are covered in linen. I think painting the ceiling a close match to the linen will make the room appear taller. Wrapping any room in the same color creates visual space.  Now, what did I do with that plastic?  Time to cover up the linen walls - again.